We're happy to announce that Polly Galita (Founder, TIOMANgrow) will be joining Chris Henderson (Practical Action) and Katharina Zechner (Project Manager, Agri Tech Programme, GSMA) as a speaker on the panel “Ripe for disruption: exploring the tech revolution in African agriculture” organized by Bobab - a social enterprise dedicated to connecting science, tech and business professionals working in and for Africa.                 From blockchain and AI to drones and vertical farms, new technologies promise to revolutionize agriculture and agribusiness in Africa. However, do the bells and whistles of the latest tech innovation mean we risk neglecting baseline technologies that can deliver the greatest impact on the ground in Africa? In this first event of the series, we explore the challenges and opportunities of scaling up disruptive agricultural technologies across the continent and whether or not they really warrant the hype.  Key discussion points: Challenges and opportunities in applying and scaling up new technologies in agricultureLow-tech, high-impact technologies improving yields across Africa Building research capacity for resilient agriculture systems on the continent  This is Event 1 in ‘The Future of Agriculture in Africa’ campaign, a series of three events exploring the challenges and opportunities defining agriculture and agribusiness in Africa today, as well as those that will come to shape it in the future. We’ll be tackling a range of issues including disruptive on and off-farm technologies, multi-disciplinary collaboration, job creation with off-farm tech innovation and opportunities in agricultural financing. In person and live-streamed to out global online community, join us as we spotlight the latest scientific, technological and commercial innovation happening in and for Africa, and the people and organizations making it happen. With insights canvassed from across Africa and around the world, we will identify a number of key recommendations that will be published after each event.

TIOMANgrow and I Can Farm Global Botswana partnership

TIOMAN is delighted to announce the partnership with I CAN FARM GLOBAL bringing TIOMANgrow to Botswana; a platform for smallholder farmers that provides free live SMS notifications with daily weather reports, pest and disease warning and with the support of the Botswana Government crop import restrictions information.  TIOMANgrow is an exclusive membership for smallholders, supported by a network of agents known as TiG agents.  The TiG agents visit the smallholders in their farms, equipped with smartphones to sign up smallholders to the membership using the TIOMANgrow App.  The application process captures information on the smallholder, including which crops they are growing, when they will be available to harvest, the location and other valuable information.   The TIOMANgrow platform supported by I CAN FARM GLOBAL in Botswana is expected to provide employment, especially for youth in rural locations as well as helping smallholders improve yields and market access.  The partnership with I CAN FARM GLOBAL also provides field training, technical support via a call center and social media groups, routes to market and the ability for the smallholder to apply for asset-based loans. The food and agricultural organization (FAO) expects the global food demand to rise with 50% until 2050 while also suggesting that by some estimates, if nothing is done to change the present trends, the integration of agricultural markets could lead 1.7B farmers to be forced to leave agriculture over the next few decades.  Brining Agtech solutions to the people who need them the most, the smallholder farmers could reverse this trend and allow them to stay competitive enough to preserve in the coming years.

But gender inequality putting a brake on sustainable development.  According to the Food and Agricultural Organization , if women farmers had the same access to resources as men, there would be 150 million less hungry people in the world.  Achieving gender equality and empowering women is not only the right thing to do but is a critical ingredient in the fight against extreme poverty, hunger and malnutrition, FAO Director-General José Graziano da Silva said today.Speaking at a  co-organized by FAO, the European Commission and the Slovak Presidency of the Council of the European Union in collaboration with the International Fund for Agricultural Development (IFAD), the World Food Programme (WFP) and UN Women, the FAO-Director General said that "Women are the backbone of our work in agriculture," noting that they comprise 45 percent of the agricultural labour force in developing countries, with that figure rising to 60 percent in parts of Africa and Asia.These numbers underscore the importance of ensuring that rural women enjoy a level playing field, according to the FAO Director-General"It's all about opportunity. Evidence shows that when women have opportunities, the yields on their farms increase -- also their incomes. Natural resources are better managed. Nutrition is improved. And livelihoods are more secured," he said.This is why rural women are key players in the effort to achieve all of the Sustainable Development Goals - but especially SDG2, freeing the world from hunger and malnutrition - Graziano da Silva added. Zero Hunger: No way to get it done without women Neven Mimica, European Union Commissioner for International Cooperation and Development, told event participants: "It is often said that if you educate a woman, you educate a whole generation. The same is true when we empower women across the board -not only through access to knowledge, but also to resources, to equal opportunities, and by giving them a voice."Yet current statistics suggest that the world is falling short on this score, according to Mimica."We know that agricultural yields would rise by almost a third if women had the same access to resources as men. As a result, there would be up to 150 million fewer hungry people in the world. And we know that children have significantly better prospects for the future when their mothers are healthy, wealthy and educated. Especially during the first 1,000 days of a child's life," he said."If we are serious about putting an end to poverty and hunger once and for all, then we all need to step up our support for rural women. As an investment in families, in our communities, in our wider societies, and in our planet's future," the EU Commissioner argued. Closing the gender gap In her remarks, Slovak Minister of Agriculture and Rural Development and current President of the Council of the European Union, Gabriela Matecná, said that "the gender gap imposes significant costs on society, in terms of lost agricultural output, food security and economic growth."Although nearly half the world's agricultural labour force is female, she noted, women own less than 20 percent of agricultural land. At the same time, 60 percent of chronically hungry people on the planet are women or girls.However "when women are fully involved, the benefits can be seen immediately: families are healthier and better fed; their income, savings and investment go up. And what is true of families is also true of communities and, in the long run, of whole countries," Matecná said. Working together toward a common goal Representatives of UN organizations also participated in today's event, stressing the importance of stamping out gender inequality and empowering women with information, training, tenure, and fair access to resources and to agricultural, nutrition, and health support services."When you invest in a man, you invest in an individual. When you invest in a woman, you invest in a community," noted IFAD President Kanayo F. Nwanze."We see time and time again that gender equality opens doors for entire communities to strengthen their food and nutrition security and to improve their social and economic well-being," he said, adding: "Empowering rural women is indeed empowering humanity.""It is only through empowering women farmers that we can unlock the power of global food systems. Supporting them is essential in creating resilience, building stronger businesses, and advancing food security in the long term," Denise Brown, Director of Emergencies at WFP, told participants.Maria Noel Vaeza, Director of Programs at UN Women, said: "Closing the gender gaps in agriculture can provide multiple development dividends, including gender equality for rural women, food security and poverty reduction, improved climate management and peaceful societies." Key facts In developing countries, women make up 45% of the agricultural labour force, ranging from 20% in Latin America to up to 60% in parts of Africa and Asia.In developing countries in Africa and Asia and the Pacific, women typically work 12-13 hours more than men per week.Across all regions women are less likely than men to own or control land, and their plots often are of poorer quality. Less than 20% of the world's landholders are women.If women farmers had the same access to resources as men, the number of hungry people in the world could be reduced by up to 150 million due to productivity gains.Women reinvest up to 90% of their earnings back into their households - that's money spent on nutrition, food, healthcare, school, and income-generating activities - helping to break the cycle of intergenerational poverty.

ABEOKUTA, Nigeria - "Come, I'll show you what a potential billion dollars looks like," said P.J. Okocha, opening the door of a small, modern house in southern Nigeria to reveal a thousand yam seedlings.

"These thousand plants can make three million seeds," he said, with a broad smile.

Okocha cut his teeth in his family's shipping and logistics business, then decided to forge his own path.

He identified Nigeria's agricultural sector as one of enormous potential where he can make the most impact. Today, he is a pioneer in hydroponics.

"I always knew I wanted to invest in agriculture but I didn't know exactly what I wanted to do," he told AFP.

"One day, I saw an agro-researcher on Twitter. I contacted him, and said, &39;Hey bro, let's change the world together"

His pitch hit home. In a few months, their company PS Nutrac was born.

One afternoon in June, young PS Nutrac employees were training a group of old local farmers on a new organic variety of yam.

Farming communities have been gutted by an exodus of young people for big cities to carve out a living, said Chief Awufe Ademola, who is in his 60s and owns eight acres (3.2 hectares) of land.

In rows before him, the old farmers sat with curved backs and calloused hands.

"With the average age of the African farmer hovering just above 60 years of age, it's imperative for the new generation to delve into farming," said Okocha.

"Nobody wants to do the conventional standing in the hot sun, and sweating and labour that comes out with that, therefore to combine it with data, technology and automatisation, it makes it more attractive."

Nigeria, which is home to more than 180 million people, is under pressure to produce more food. By 2050, it is expected to become the third most populous country in the world. After the discovery of oil in commercial quantities in the 1950s, Nigeria's prosperous agricultural sector suffered a precipitous decline as successive leaders and investors switched focus entirely. Decades have passed and with the collapse of the railway network, agricultural goods now have to be transported by truck on crumbling roads. There are not enough storage sheds; those that exist are mostly not refrigerated, and there are few processing plants. That means huge amounts of produce go to waste in a country so fertile it can grow everything from avocados to cashews to corn.

For example, about four million tonnes of citrus fruits are produced annually, according to US Department of Agriculture figures for 2009. But up to 60 percent goes to waste before getting to the final consumers in urban centres. Meanwhile, Nigeria imports 315 million dollars (270 million euros) of orange concentrate a year, the bulk of national consumption.

"Opportunities in agriculture are beyond the imagination," said Buffy Okeke-Ojiudu, the proud owner of a 200-hectare (495-acre) palm oil plantation in the southeast.

"The future billionaires in Nigeria will be people investing in agriculture, tech and renewable energy, which are sectors that can create employment, not like the oil sector," said the 34-year-old, whose grandfather was Nigeria's first minister of agriculture. 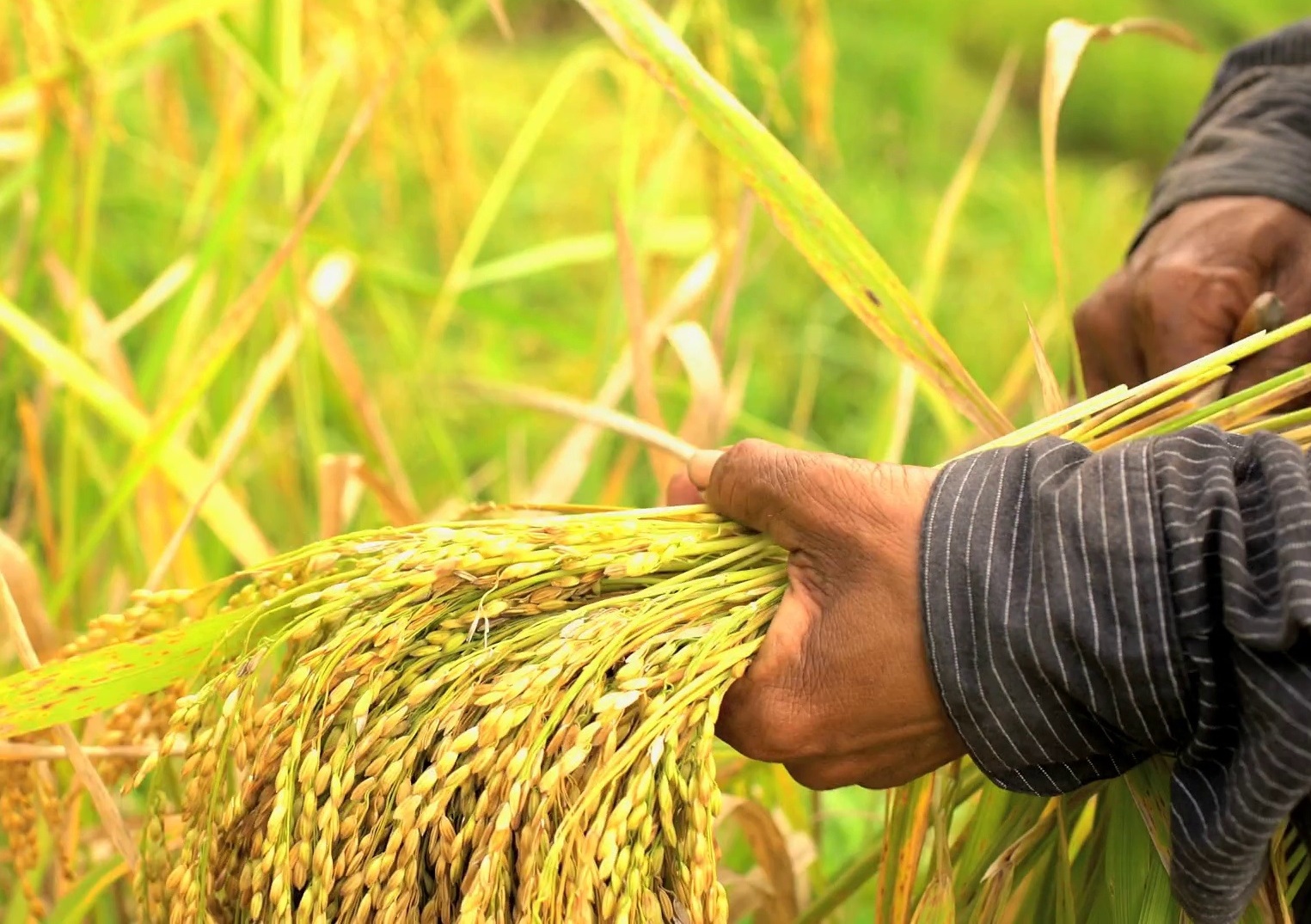